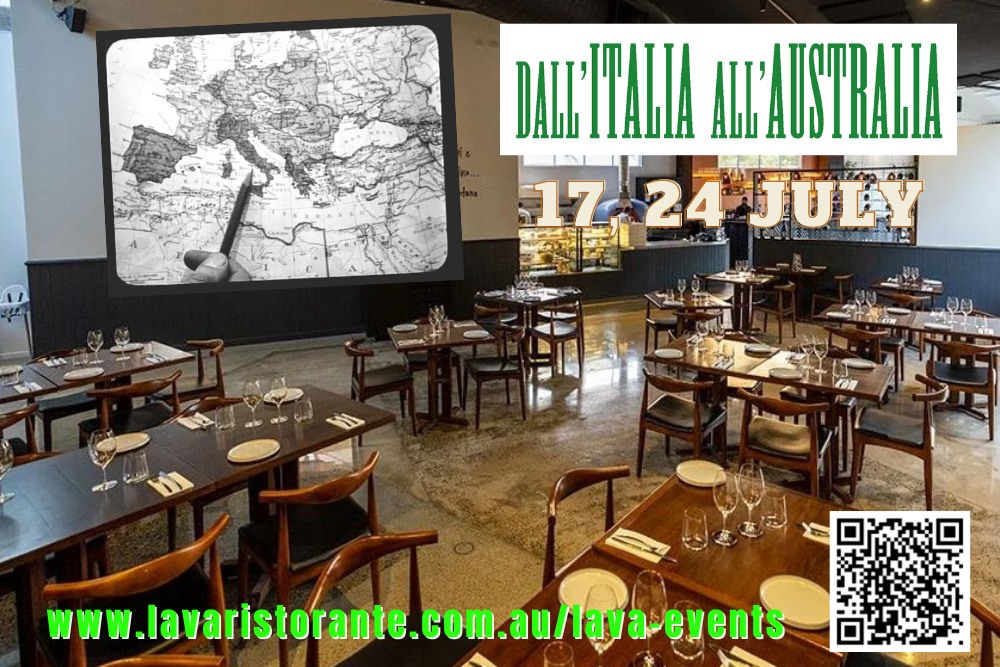 Join us for a celebration of Italian and Australian heritage, with the showing of the 1924 silent film Dall' Italia All' Australia and live music by Zumpa with a 4 course menu by Lava Ristorante, 1 Florence St, Teneriffe, Brisbane.

Tickets for both nights available to book now. 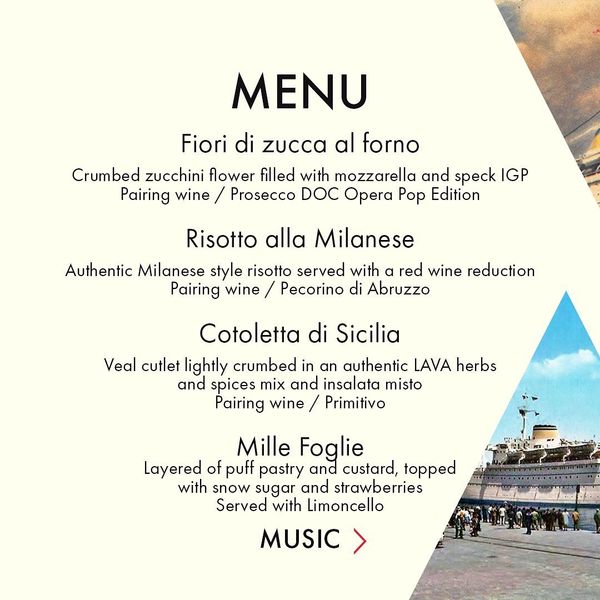 In 1924, film director Angelo Drovetti embarked on epic 8,000 nautical mile voyage. The result is regarded as the most comprehensive film ever made of a migrant voyage.

ABOUT THE NIGHT
There will two performances with limited tickets on Sunday 17 and Sunday 24 July 2022.

- Starts at 5pm, dinner and drinks - 4 courses
- The film and live Italian folk music performance by Zumpa.
- There will be pre-show entertainment including Taranta dance demonstration on 24 July by Anna Cerreto and Tarantati Meanjin.

See below for more information about the film, performance and the list of the passengers who disembarked Brisbane from the Regina D'Italia,1924

Dall'Italia All'Australia (From Italy to Australia), is regarded by many as the most comprehensive film ever  made of a migrant voyage. In 1924, the Italian film director Angelo Drovetti embarked on an epic 8,000-nautical-mile voyage with his movie camera aboard the Regina D'Italia.

Melbourne Journalist and author Tony De Bolfo stumbled onto the existence of Dall’Italia All’Australia through his research for a book entitled In Search of Kings (Harper CollinsPublishers) - dealing with what became of 108 passengers including his grandfather Silvio De Bolfo and his brothers Francesco and Igino - who disembarked the steamship Re d’Italia (King of Italy) in Melbourne in November 1927. Tony discovered the existence of Dall’Italia All’Australia after scouring a website for the Bologna Silent Film Festival where the film was screened in 2003.

Since that time the (silent) film has been screened all over Australia with a live musical score by I Viaggiatori with the last performance in 2017. The film will have a revival and will be coming to Brisbane in May 2022 with live music by Zumpa which includes David De Santi from I Viaggiatori.

During Tony De Bolfo's research he discovered the Australian Regina d'Italia disembarkee passenger lists from the 1924 journey. These are available in I Viaggiatori website and make interesting reading for anyone with Italian heritage in Australia. The list of Brisbane passengers that disembarked is below.

The film includes footage of Fremantle, Perth, Adelaide, Melbourne, Sydney and Brisbane. The Brisbane footage, prior to the Story Bridge, includes the river, the city and Howard's Wharves.

The band Zumpa will provide an accompanying suite of Italian folk music that will transport you to forgotten Italian fishing villages, moonlit olive groves and a hard life under a hot sun where peasants play music to celebrate life with a fierce sense of humour. They will provide the sounds and energy of folk, gypsy and Italian world music woven together to provide a truly spaghetti and meatballs experience.

Dall' Italia All' Australia film and music performance by Zumpa

20 and 21 May 2022, Queensland Maritime Museum as part of the Anywhere Festival

In 1924, the Italian film director Angelo Drovetti embarked on an epic 8,000-nautical-mile voyage with his movie camera.

The result, Dall'Italia All'Australia (From Italy to Australia), is regarded by many as the most comprehensive film ever  made of a migrant voyage.

‘Dall’Italia All’Australia’ chronicles the voyage of the Regina d’Italia (Queen of Italy) - one of three passenger ships first built for the Lloyd Sabaudo Line at the turn of last century.

The film showcases the panoramic views witnessed by Italian, Yugoslav, Greek, Arabic and Jewish migrants as they stood atop the deck of the old steamer during their seven-week world odyssey from Genoa to Australia, by way of Egypt & Sri Lanka, arriving in September 1924.

Dall’Italia All’Australia, of 60 minutes duration first screened in Italy in May 1925. The film chronicles the voyage of the passenger steam ship Regina d’Italia (Queen of Italy) – one of the three ships first built for the Lloyd Sabaudo Shipping Line at the turn of the century.

The film is silent and in black and white. It has Italian intertitles with English translations.

The film is 60 minutes in duration. The film is presented in 2 parts with an intermission of 20 minutes.

The musicians are positioned in front of the film screen and to one side and perform live Italian folk tunes and songs while the film is showing.